Our pupils sing on stage at the Genting Arena 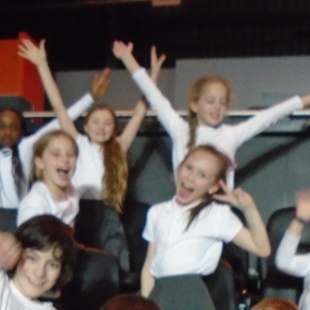 A group of pupils in Years 4, 5 and 6 recently performed at the Genting Arena in Birmingham as part of Young Voices.

A group of pupils in Years 4, 5 and 6 recently performed at the Genting Arena in Birmingham as part of Young Voices.

The concert, that aims to inspire a love of music and create long lasting memories, was led by a professional conductor and saw our pupils take to the stage with over 6,000 other children from schools around the UK. They also were able to sing alongside popular artist such as the M4GNETS, Natalie Williams and Alfie Sheard.

On the day the pupils travelled up to Birmingham by coach for an afternoon full of rehearsal, where they practised their songs and dances with professional coaches. In the evening they then took to the stage to performs songs such as ‘Name That Toon’ and ‘Stevie Wonderland’ to friends, family and music enthusiasts.

Miss Dawson said ‘It was a very long day for the children but they all thoroughly enjoyed preforming on stage and I think it has really helped with their confidence.’

Pupil Enzo said ‘I decided to take part as I really liked the song. There was lots of people watching us so I was very nervous but I really enjoyed it and would definitely do it again.’

Pupil Rosie said ‘We had to rehearse for a long time which was very hard but it was really exciting performing on stage and has made me feel more confident to stand up and talk in front of my class.’

Pupil Holly said ‘ I decided to take part as I am in the school choir. I dance on stage at the Corby Cube but have never performed at a venue as big as this one. It was really fun and we were able to watch the other singers and dancers perform.’