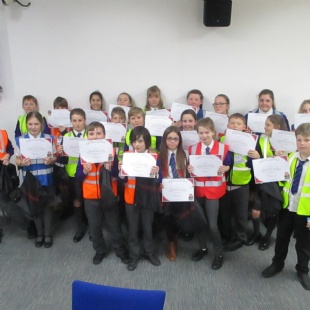 Pupils gained an insight into the world of engineering on a recent visit to Nissan’s Testing Centre in Cranfield.

Pupils gained an insight into the world of engineering on a recent visit to Nissan’s Testing Centre in Cranfield.

The pupils took part in multiple activities including: building and racing cars out of K-nex, learning Japanese words and were even treated to a tour.

Once they had built their cars out of K’nex, the children were able to race them against one another. Each team had to use trial and error to work out how to make the fastest car, allowing them to learn key skills about the design process.

During the tour, the pupils learnt how important each test was to make sure the car was ready for purchase. They even saw some cars that have not been unveiled to the public yet.

At the end of the visit the children were presented with a bag of Nissan goodies and the class were given a Japanese Daruma doll, which we are now proudly displaying in school.

Year 6 pupil Amy said ‘The tour was one of the most interesting parts of the day and overall we all had a fantastic time.’

Principal Mrs Jane MacDonald said ‘ It’s been brilliant to follow on from our ‘Ambition For All’ month with more career inspired trips. The money we raised from our month as torchbearer has allowed us to pay for the transport for this trip. The children really enjoyed the day and I think some of them have been really inspired to consider a career in automotive engineering.’

Thank you to Nissan for providing us with a brilliant day.